Too scarce to waste: Why use of drip irrigation systems is growing 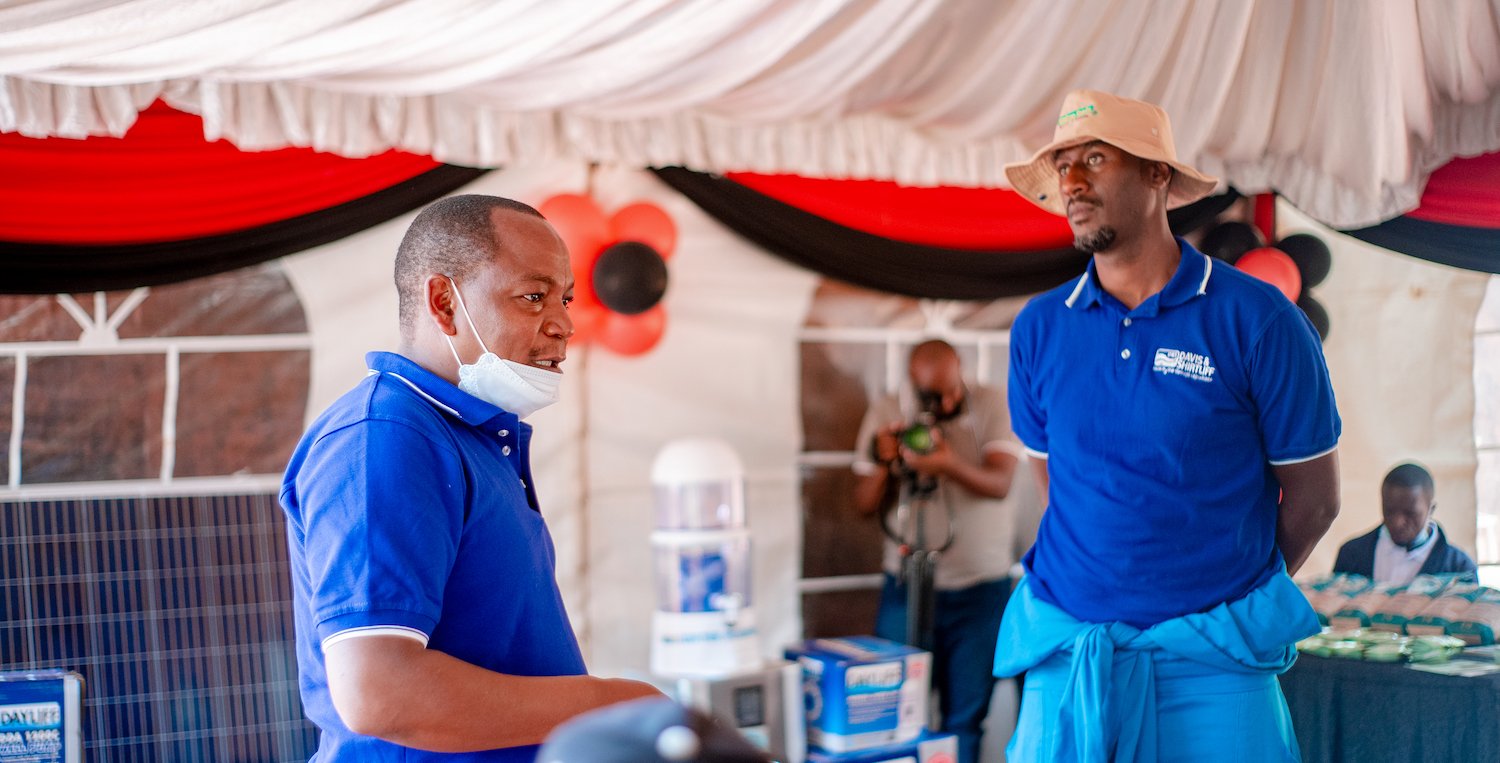 Stephen Wambua (L), the irrigation manager at Davis & Shirtliff and Caleb Karuga (R), a farmer and the company’s brand ambassador during an open day with farmers at the company’s demo farm in Gikambura, Kiambu County. Photo Credit: Davis and Shirtliff.
Download PDF

F
aced with the scarcity of water brought about by rainfall shortages and the persistent droughts experienced in most of the semi-arid and arid areas in Africa, many farmers are cutting reliance on rainfed agriculture and adopting irrigation technologies and innovations that minimise usage of water in farming.

Compared to the traditional methods such as center pivot, flood irrigation and sprinkler irrigation, a drip system can increase a farmer’s water efficiency by up to 70% and reduce energy costs by 50%. Stephen Wambua, the Irrigation Manager at water and energy solutions provider Davis & Shirtliff, says drip irrigation is becoming a popular solution for water scarcity and waste.

“Unlike other forms of irrigation, such as sprinklers that are only 65-75% efficient, drip irrigation is 90% efficient at allowing plants to use the water applied. It reduces runoff and evaporation. Drip irrigation applies the water slowly at the plant root zone where it is needed most,” says Wambua.

Davis and Shirtliff has physical presence and continues to expand beyond the current 11 countries in Africa including Kenya, Uganda, Tanzania, South Sudan, Ethiopia, Zambia, DRC, Zimbabwe, Somalia, Ghana and Rwanda and supplies irrigation systems in at all branches. Different forms of drip irrigation systems include drip line irrigation and under low pressure irrigation.

Under low pressure irrigation, there are different types like button emitters, under tree sprinklers as well as mist sprays and hoses. “The most efficient and commonly used amongst these is the drip line where you

run a latticework of perforated drip pipes supplied from a main pipe and you can have an entire segment into different zones with each zone controlled by a valve.

This allows a farmer to open a zone or two at a time and the design depends on the block size,” says Wambua. This means a farmer can have a huge scheme, segmented into so many zones for ease of management.

Drip irrigation involves placing tubing with emitters on the ground alongside the plant rows. The emitters slowly drip water into the soil at the root zone. Because moisture levels are kept at an optimal range, plant productivity and quality improve.

Agricultural land on the other hand continues to deteriorate due to poor farming practices, hence creating an unfavorable food supply balance. “In 15 to 20 years ago boreholes were all over in Nairobi and environs were around 150 to 250 metres deep but currently most areas in Nairobi, the water table has dropped to more than 350 metres deep, which means it is harder to get underground water, the quality of which further degrades with increased depth,” Wambua says.

Another source of major concern for farmers and those who consume their produce is quality of water. As the rain water percolates into the ground, it dissolves minerals in soil and rock formations, getting contaminated in the process.

This means a farmer will spend extra investment to have the water treated for use. Current treatment systems offered in the market are not pocket friendly and most farmers end up abandoning the enterprise due to this limitation.

“When it comes to irrigation, water quality is of much importance. In our rivers and streams we have seen the levels of contamination, with industrial refuse released before

treatment compromising the quality of water. Most manufacturing plants release Lead, Cadmium and other carcinogenic elements in these streams which makes it hard to use for irrigation as you will find these elements are harmful when taken up by the plants. These toxic elements are in turn ingested by humans and are a health hazard with continues consumption.

In drip irrigation, water quality is key,” Mr Wambua says. “It is the levels and the quantity of these undesirable elements that we really need to worry about and so by the use of drip we are able to use 40% less water that is of quality than most other systems that are currently in the market.

We are able to utilize much less water, and clean water to cover the same area as we use for other systems.” He notes that drip water saves water as it uses a latticework of pipes with drips being laid along rows of crops making it easier to irrigate along the rows. This means a farmer does not irrigate where there is no crop or plants and so makes it easier to even control weed growth. Another advantage of using drip irrigation is that it aids in plant disease control.

“Tomatoes, potatoes and other Solanum family plants are very prone to soil and waterborne diseases. Tomato and Potato blight has been a nightmare for farmers. Blight is harbored in soil and spreads quickly when rain drops splash soil on plant leaves.

This makes it difficult to control such diseases when using other types of irrigation like sprinkler. With drip irrigation, it is all laid on the ground and therefore splashing of soil is eliminated,” says Wambua. Any crop can be irrigated with drip irrigation.

However, the initial investment in a drip system is further justified by planting high value crops such as vegetables or perennial crops such as berries and fruit trees to ensure a faster return in investment.

“This type of irrigation delivers water and nutrients directly to the plant’s root zone, in the right amounts, at the right time, so each plant gets exactly what it needs, when it needs it, to grow optimally. If well designed, drip irrigation enables farmers to attain higher yields while saving on water as well as fertilizers and energy,” says Wambua