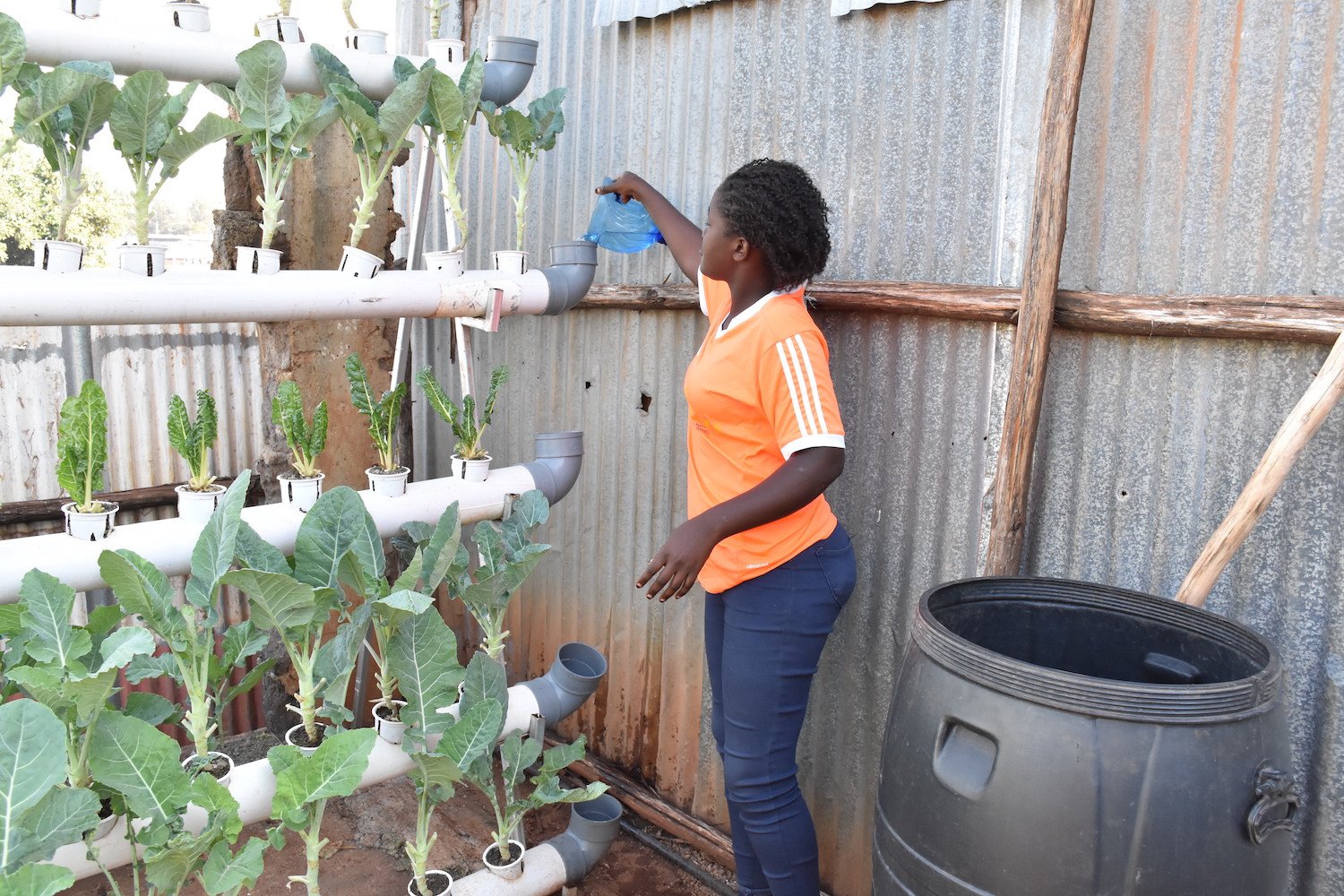 Lockdowns and curfews imposed by the state to contain the spread of the coronavirus at the height of the pandemic in 2020 and 2021 saw people lose jobs and shut down businesses.

With children also idling at home following school closures, the pressure on the low-income earners to feed their families piled amid food shortages.

Grace Awuor, 24, says residents had to get innovative and find alternative ways of sourcing food to survive the pandemic shocks.

“We had to devise methods to counter the challenges, especially the shortage of food to our families.

Due to lack of space in overcrowded and expansive shelters, we reclaimed a dumpsite to plant vegetables.

We had a few sack gardens as well,” says Awuor, a member of a group of youthful farmers in the slum.

The group of five started off without farming skills, but were encouraged to see their first crop flourish beyond expectations.

Awuor and her friends initially grew the vegetables for family consumption and offered surplus for free to the more needy residents.

After a few months, the group’s efforts caught the attention of Kibera Town Centre (KTC), a community-based organisation that addressed human needs. The KTC offered support, including training, to enable the group upgrade their farm to a hydroponics system.

Hyroponics involves growing crops without use of soil. “We switched to hydroponics farming because of challenges we experienced with the traditional ground farming of vegetables.

The soil became contaminated which spread diseases to crops and so we spent a lot of money buying pesticides to treat the soil and crops. We wanted Kibera residents to feed on safe and quality foods,” Awuor says.

Awuor says after adopting hydroponics, they partnered with WFP to distribute the produce through Mama Mboga (grocery) system of distribution.

The system allows women traders to harvest the vegetables in bulk and sell it within the community at affordable prices. “Upon partnering with WFP, we named our group Hydroponics Project- Victor’s Community Farm after the team leader who came up with the idea,” Awuor says.

“Our target has been to increase food supply in Kibera and raise awareness among residents on alternative sources of food and farming systems.” In addition to supplying their community with fresh and safe vegetables such as Sukuma Wiki (collard greens) and spinach, the project has also created jobs for the five youth in an area with a high unemployment rate

They use plastic containers to plant the vegetables on top of pipes arranged vertically in a slanting shape like letter ‘A’. A nutrient solution is poured into the pipes from one end and flows through a tunnel to the other end for plant roots to pick it. “We usually apply the nutrient solution twice a week, on Tuesdays and Thursdays.

During rainy seasons we don’t water while in dry weather we water frequently,” Awuor says. Emily Adisa, a 36-year-old hydroponics farmer, says the system has many advantages, notably the minimal amounts of water used, being free from diseases usually brought about by contaminated soil, the less space required and no dependence on weather patterns.

Hydroponics is less labourintensive and does not require land tillage, crop rotation or weeding and does not exhaust the soil. It also helps in stabilising food prices in the market by ensuring consisted supply.

“In my opinion, it is a solution in countering pressure on land as the population continues to increase and livestock grazing areas shrink. If the system is managed properly and replicated across the country, it could contribute a lot to Kenya’s food security efforts and create jobs,” Adisa says. 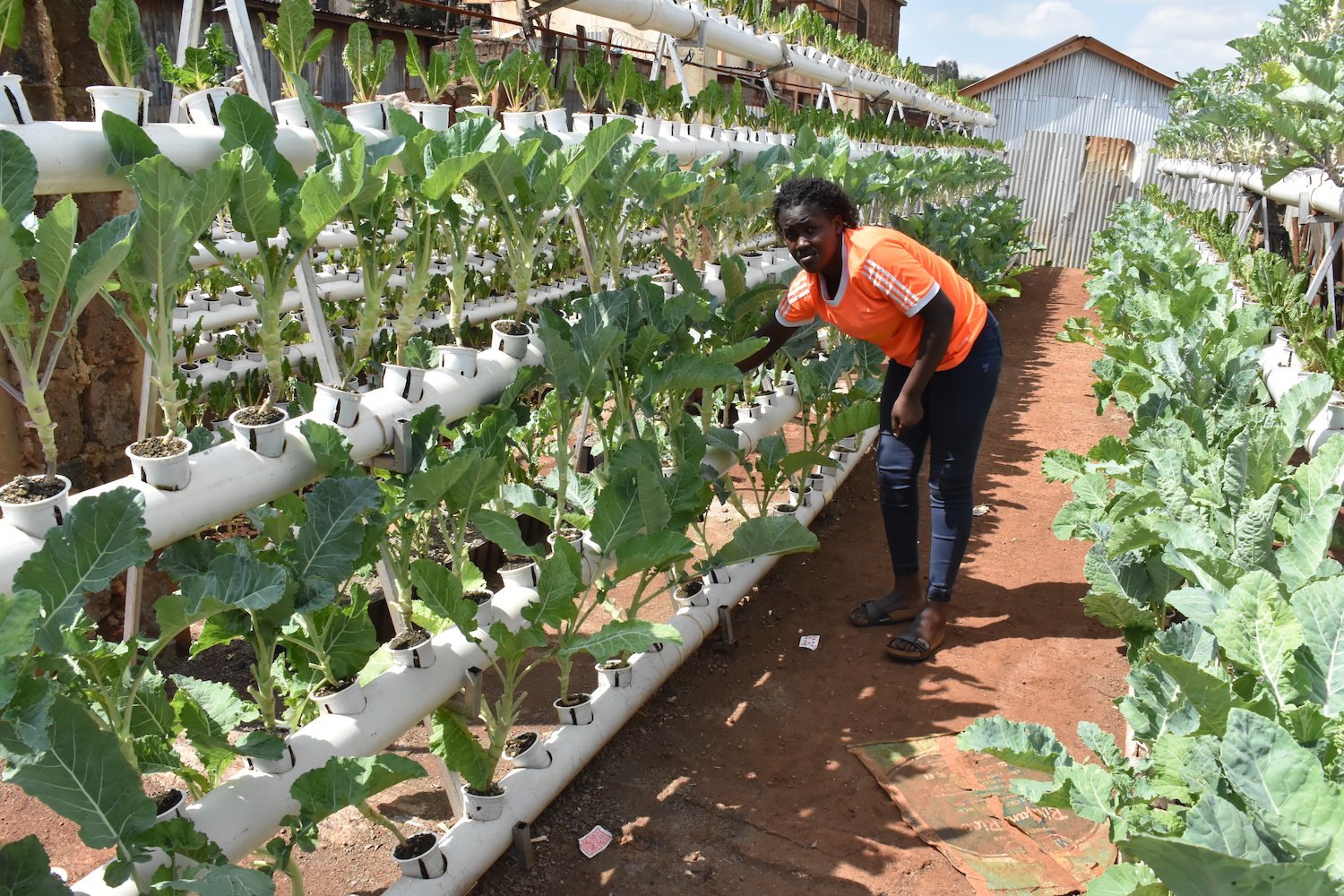