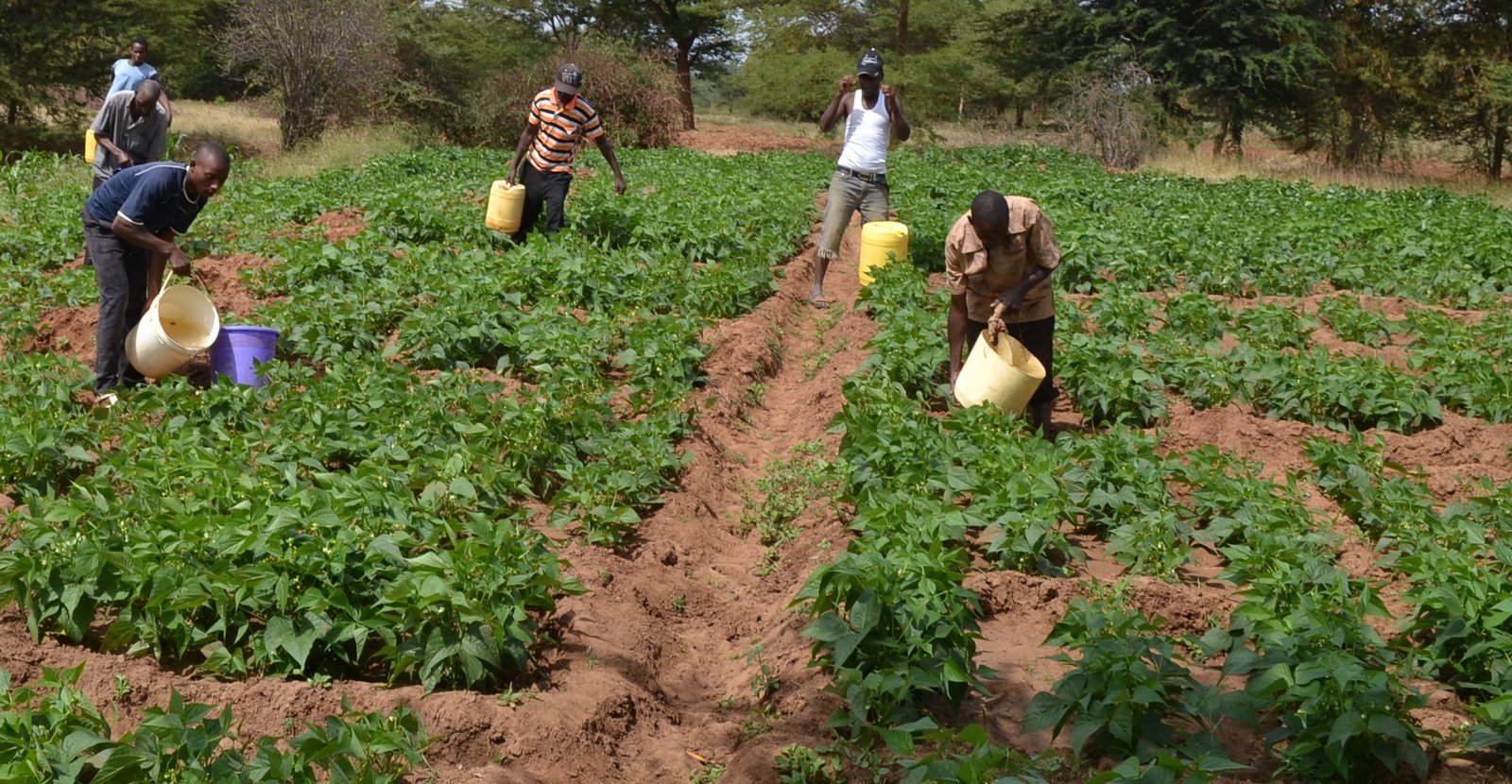 Farmers in Cameroon, through the support of Grass field Rural Infrastructure and Participatory Development Support Project (GP-DERUDEP), have been able to construct small canals through which water is channelled to their fields. Photo Credit: Elias Ngalame
Download PDF

F
ARMING communities in Cameroon’s Akum and Santa districts live on the flanks of the lush highlands from where some streams flow to semi-arid savanna in Northwest region.

But accessing the streams for water during dry seasons has been a daunting task, especially for women vegetable farmers, due to the rough, stony and hilly terrain nearby. Now, a community-driven irrigation project is allowing them to access water for their fields, helping them grow vegetables throughout the year and better cope with the effects of a worsening drought associated with climate change.

The irrigation system involves a network of canals used to channel water from some of the streams to the fields. “We could not grow our vegetables and other crops during the prolonged dry periods because of lack of water. We have been suffering even though we are blessed with nearby streams,” said Jude Awantung, a farmer in Santa. “The irrigation we have initiated is a blessing to us as we now have good yields even in the prolonged dry periods.

” Similar sentiments are expressed by Akwi Rachel, a member of one of the vegetable farmer groups benefiting from the irrigation scheme in Akum “We are grateful to God for providing us the streams through which we are tapping water to grow our crops. Even in the absence of rain, we are now sure of food on our tables and income to send our kids to school,” she said. With assistance from the Grass field Rural Infrastructure and Participatory Development Support Project (GPDERUDEP) some five years ago, the farmers were able to construct small canals through which water is channelled to their fields. Some built small water storage tanks on their farms from where water is tapped for irrigation during prolonged droughts.

The irrigation project, he said, has gone a long way in improving production and livelihoods on the vegetable production basins in the Northwest. It was funded by the African Development Bank (AfDB) under the second phase of the Grassfield Rural Infrastructure and Participatory Development Support Project.

“We are happy the irrigation programme is improving agricultural production and incomes of beneficiary communities,” said Gregory Muluh Ngu, coordinator of GP-DERUDEP.

The building, monitoring and maintenance of the water catchments and small dams in some cases are carried out by the community. The irrigation systems serve around 139,000 farmers and 84,600 agricultural labourers in the two districts of Santa and Akum, who use it to grow assorted vegetables.

Officials say that with rain-fed agriculture becoming increasingly unreliable in the drought-prone Northwest region, support to the swelling number of farmers has become crucial. “Replicating initiatives like these in other parts affected by drought will significantly boost food production in the country,” says Nutoto Godfrey, Regional Delegate of Agriculture and Rural Development Northwest.

“These farmers, most of them women, have the unique advantage of growing a variety of vegetable crops during the off-season (dry season), getting over five harvests in a year, which is supplied throughout the Northwest region and other big markets in the country thanks to the irrigation schemes.”

Cameroon’s Northwest region has a population of 1,850,000 and a poverty rate of 51 percent and is home to 13 percent of the total number of the rural poor in the country, according to government statistics. The irrigation projects have succeeded in bridging the yield gap of many food items and dramatically increased vegetable production at smallholder farm levels from hitherto less than

10 percent during the dry season to over 90 percent currently.

Growing maize and vegetables like cucumbers, lettuce, cabbage, tomatoes and okra is now an allyear-round business for these farmers, resulting in increased income and better-living conditions.

Short season crops like tomatoes, cucumbers, beans, peppers, lettuce and parsley and fruits like watermelons, are now available throughout the year regardless of the season, ushering a new era in the agricultural history of the North West region. The impact of the irrigation project is also felt in the major cities where vegetable supplies to the food markets have improved. “I now produce enough tomatoes for our local markets and bigger markets in Douala and Yaoundé even in the dry season,” said Ms Awantung.

The project is estimated to have raised annual vegetable production by about 37,000 tons as well as an yearly increase in income per producer from CFAF 250,000 in 2019 to CFAF 357,910 in 2021. Pressure on food supplies in Cameroon has increased, notably in the droughtstricken Northern and East regions. The situation has been aggravated by the ongoing Russain-Ukraine war that has seen the prices of food items surge and a growing influx of refugees into the country.

More than 65,000 refugees from Nigeria and some 259,145 others from the Central African Republic (CAR) have come into host communities in the North, Far North, Adamawa and East regions of the country with very limited resources, aggravating an already ongoing nutrition crisis in these areas, part of the drought-stricken Sahel. According to UNICEF statistics, an estimated 61,262 children under 5 in Cameroon are expected to suffer from life-threatening severe acute malnutrition in 2016 as a result of this ongoing crisis. Government officials say agriculture remains the critical sector towards Cameroon’s economic recovery drive by 2035.

Farmers wait to load baskets of tomatoes onto a truck in Yaounde. Photo Credit: Elias Ngalame