What can we learn from the current food price shock? 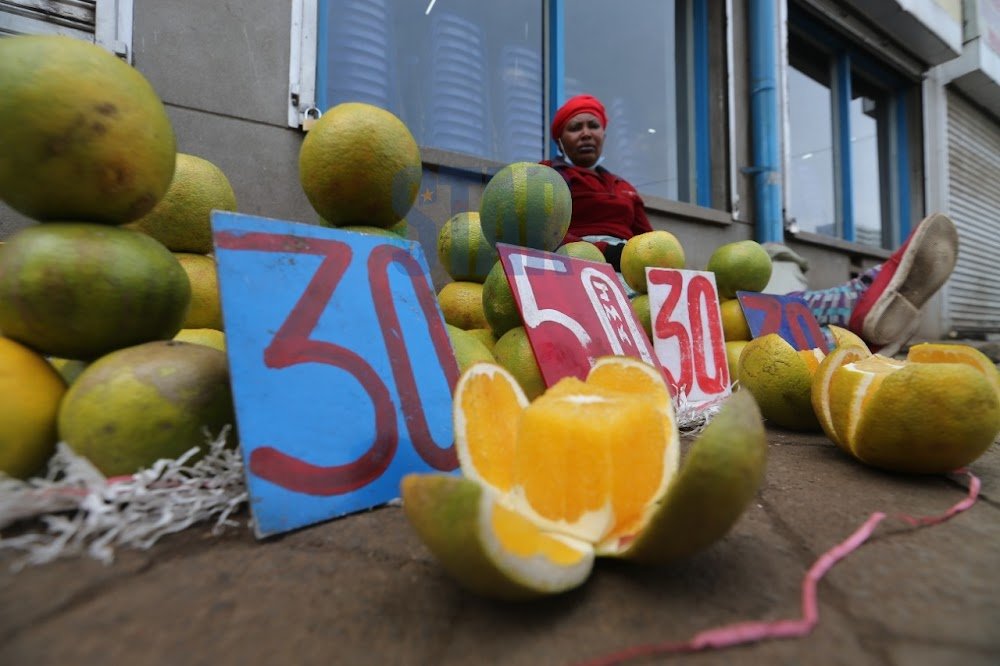 A fruits vendor selling fruits on the street of a town in Kenya. Photo Credit The Star

Ukraine accounted for 94 percent of soya imports as well as contributing to wheat (2.0 percent) and maize (3.0 percent) imports. The price of fuel is expected to go up as a result of this crisis. The government responded by announcing a fertiliser subsidy in June. However, this was too late as the season had long gone. In July, the government announced a subsidy on maize flour.

Both subsidies are not likely to have a meaningful impact on alleviating the food insecurity. Firstly, farmers incurred very high costs of production, and are expecting higher prices for their output to recover their costs.

Download PDF
Dr Timothy Njagi
T
HE year 2022 has seen food prices rise to an unprecedented level in Kenya’s history. At the start of the year, citizens expressed the frustration of rising food inflation as prices of key items such as maize flour, wheat flour, cooking oil and vegetables rose. Prices started rising during the last quarter of 2021 and have continued to rise through 2022, triggering the government to temporarily implement subsidy programmes targeting maize in July and August. The government announced duty waivers for maize from July 1, followed by a maize flour subsidy that reduced the price of maize flour by 50 percent.

Food inflation has risen on average by 12 percent in 2022 compared to the same months in 2021, according to Kenya National Bureau of Statistics (KNBS) data. The highest increase was experienced in June when the price of maize flour, beef and cooking oil rose to an all-time high. The rise in food prices has been attributed to a number of factors.

First, the government increased excise duty on most commonly used household goods such as cooking gas and fuel from November 1, 2021 through inflation adjustment to the excise tax. The tax increases were attributed to the deal Kenya signed to secure loans from the International Monetary Fud (IMF) as part of the pandemic relief interventions. Second, the rising prices have also been attributed to global supply chain disruptions that have increased the costs of importation.

Kenya is a net importer of food. Domestically, production shocks due to adverse weather and rising costs of transport are seen as key contributors to the rising food prices. Third, the effects of the Russian invasion of Ukraine triggered a global food price shock as the two countries are bread baskets for Europe. Even as this debate rages, it is important to highlight key issues on the effect and causes of the current problem.

First, poor households bear the brunt of rising food costs. According to data from the KNBS, food accounts for 54 percent of Kenyans’ household expenditure on average.

Those in rural areas spend 65 percent. Also, an average of 68 percent of food is purchased by households, with those in urban areas purchasing 85 percent of what they consume. Second, Northern Kenya and other arid lands in Kenya are facing a drought affecting the Horn of Africa.

By August 2022, 4.3 million Kenyans across 20 counties were in need of food assistance. Already, there are rising numbers of children reported to be malnourished in seven counties that are worst affected by the drought.

The outlook for the country and affordable food prices given the status quo is pessimistic. Last year, livestock farmers were hit hard by rising costs of animal feeds in the country.

The rising cost of animal feeds was attributed to shortages in raw materials such as soya in the global markets due to the effects of the pandemic. Kenya imports most of the raw materials for animal feed manufacturing.

Unfortunately, most farmers were driven out of business because they could not compete with cheap imports from neighbouring countries. To protect local producers, the government imposed a tariff on some of the products.

However, this adversely affected consumers. The tariff was lifted in December 2021. The government announced a duty waiver on raw materials for animal feeds, but rising global prices mean that the expected effect in reducing local prices for animal feeds has not been realised.

On the other hand, fertiliser prices rose by 70 percent from those during the main planting season time last year. The rise, which started in 2021, was mainly attributed to supply chain disruptions due to the pandemic. The Russian invasion of Ukraine has further complicated matters pertaining to food security and prices for Kenya. In 2020, Russia accounted for 17 percent of fertiliser imports to the country.

Also, Russia was the leading exporter of wheat to Kenya, accounting for almost one-third (32 percent) of wheat imports to the country.

Had the fertiliser subsidy been announced in March, this would have alleviated the costs for farmers and helped lower the price. Alternately, the government could also have considered a duty waiver on fertilifer from December 2021 for similar results.

Although the government has made efforts to implement some of these potential solutions, overall, we are still far way off from where the country ought to be. First, the government needs to enhance the availability of credible data on food availability. This has been lacking, or when available it is not credible. For example, early in the year, millers claimed maize shortage was the reason behind the rising cost of maize flour.

Farmers refuted this claim pointing to local availability for maize. Credible data is very useful to have right and impactful policies. Second, the government can review some of the policies currently in place to avert potential crisis. For example, the total ban on GM products means that Kenya struggles to replace countries such as Russia or Ukraine in supply of wheat and soya as most of the leading producers in the world produce GM products.

This policy also prevents the lowering of animal feed prices, which can lead to increased local production of animal products. This policy waiver should definitely be considered even as a short-term measure. Third, the national government and county governments must put more emphasis on growing agricultural productivity.

A starting point is the revamping of extension and advisory systems to provide farmers with the necessary knowledge and information on how to improve their yields.

Beyond improving yields, there is need for public sector investments to enhance the infrastructure for post- harvest storage and management. Finally, the government must review the trade policies to be more strategic especially on key staples.

For example, trade deals to secure grain from EAC or COMESA should have been negotiated as early as May as it was clear that the country was likely to have a deficit in production. Early deals are likely to secure more value and reduce speculation in the markets.

Dr Timothy Njagi is a Development Economist and Research Fellow at Tegemeo Institute of Agricultural Policy and Development.