A worker standing next to a healthy banana plant on a farm where organic fertiliser is applied. Photo Credit: Lydia Atieno

Download PDF
L
IKE many African cities, Rwanda’s capital Kigali has over the years struggled with managing its waste.

Official estimates show the quantity of waste dumped at the city’s landfills tripled from 141.38 tons every day in 2006 to 495.76 tons currently, posing a health hazard to the people living nearby.

Experts warn that the waste management problem could get worse as Kigali’s fast-rising population churns out more refuse. Rwandese startup turning landfill waste into fertilizer A worker standing next to a healthy banana plant on a farm where organic fertilizer is applied. Photo Credit: Lydia Atieno By Lydia Atieno The population of the city stands at about 1.6 million compared to one million in 2015 and 603,049 in 2002.

But where others see a waste management problem, Evariste Ngarukiye and his two colleagues see in the landfills an opportunity to support the country’s agricultural production and improve food security. The trio are the brains behind the Rwandese startup company BIDEC Group, which makes environmentfriendly organic fertilisers and insecticides from waste collected from Kigali’s landfills and promotes regenerative agriculture in the country.

Regenerative agriculture involves farming practices that focus on rejuvenating soil health. “Heaps of waste were becoming a huge problem for those living near landfills because of the odour from it. But we realised most people didn’t have an idea the country could make its own fertilisers from the waste instead of relying on non-organic fertilisers imported from other countries,” says Ngarukiye.

They founded BIDEC Group in 2018 after being trained by experts from Bangladesh and the Netherlands and researching on regenerative agriculture between 2011 and 2017. BIDEC’s workers collect and sort waste from the landfills with a special machine and then compost it together with manure from domestic animals such as cow urine, chicken droppings, cow dung and piggery waste and green leaves.

The company produces 40 tons of compost manure per day and presently has about 16,000 tons in its stores at Huye, Rubavu and Gasabo districts where it also operates. A kilo of the manure costs Rwf 100, but the price is lower for those who place an order.

A farmer is advised to apply 4kg per banana plant, two ladles in a hole for cabbage, eggplant, tomato, pineapple and 4kg in a hole for coffee. For rice, a farmer is required to apply 150kg per hectare after planting and 100kg per hectare at flowering. Experts believe that regenerative agricultural practices such as applying organic manure ensure the soil is able to sustain a huge volume of crops, reduces degradation of natural resources and improve farmers’ incomes and livelihoods. Solange Mbabazi, a potato farmer in Gasabo District, says that since she started using organic manure, 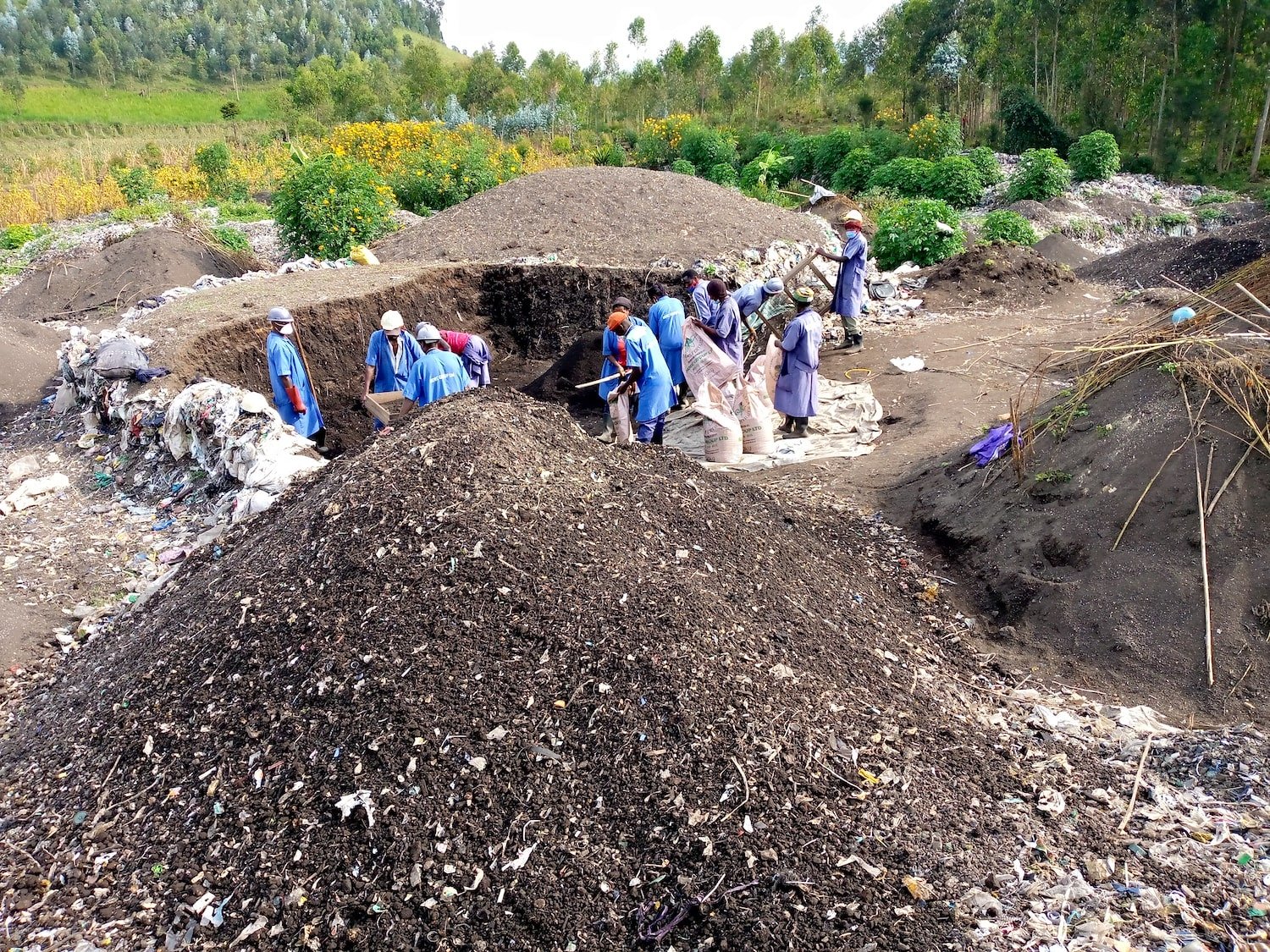 she has seen an improvement in yields and saved money on purchasing fertilisers. “Before I would purchase a 50-kilo bag of non-organic fertiliser at Rwf 50,000 while at the moment, I use only Rwf 5,000 for fertiliser,” she says.