My footprints on Africa’s farmlands 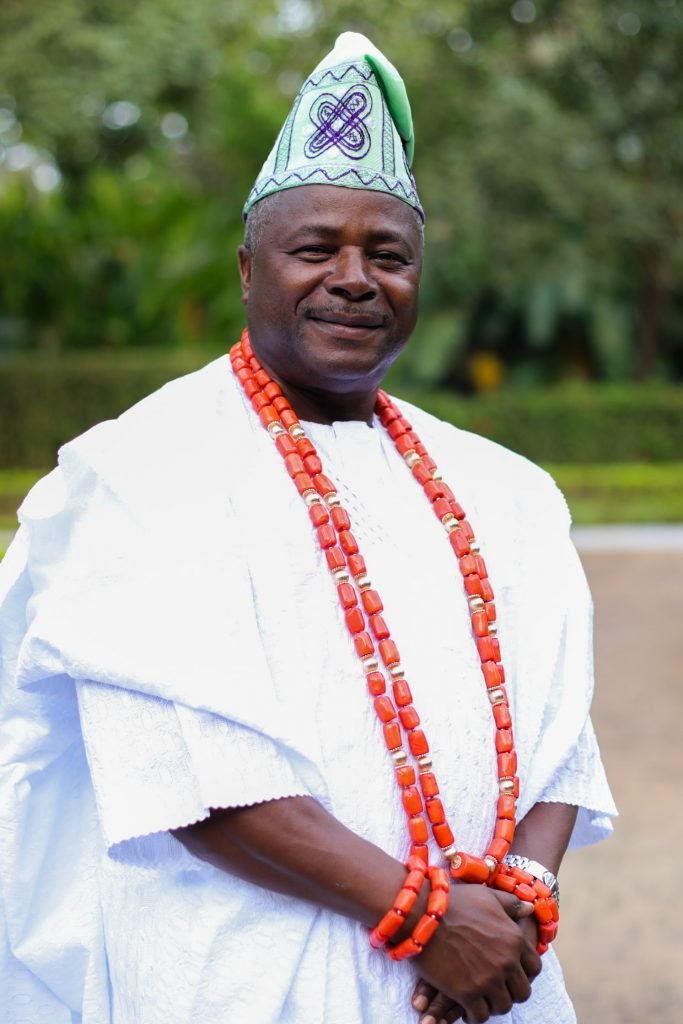 Dr. Nteranya Sanginga, the Director-General, International Institute of Tropical Agriculture (IITA). Photo Credit: IITA.
Download PDF
I
t is difficult to have a conversation about agricultural transformation in Africa without highlighting the contribution of Dr Nteranya Sanginga. The Director General of the International Institute of Tropical Agriculture (IITA) is regarded as a one-man think tank by his peers and those he has mentored. Dr Sanginga opened up about a career journey that was nearly derailed by his boyhood love for soccer and his rise to become a celebrated global leader in agriculture. PanAfrican Agriculture brings you his story……..

Nteranya Sanginga left a university teaching job in the Democratic Republic of Congo in the 1980’s to study for a PhD, advance his personal career, and enjoy whatever else life had to offer. He will be returning to his homeland as one of the most influential global leaders in his profession, a decorated African food hero, and perhaps the most prominent Congolese in the international public service system.

Last December 2021, the soil scientist was installed as a Yoruba traditional chief, inducting him into the House of Lords for one of the most powerful aristocracies in Nigeria as well as on the continent.

The chieftaincy title, aptly christened Lord Sower, was conferred on Dr Sanginga in honour of his contribution to improving Africa’s agriculture and food security. The coronation coincided with his 10th anniversary as the first African director-general of the Ibadanheadquartered International Institute of Tropical Agriculture (IITA). 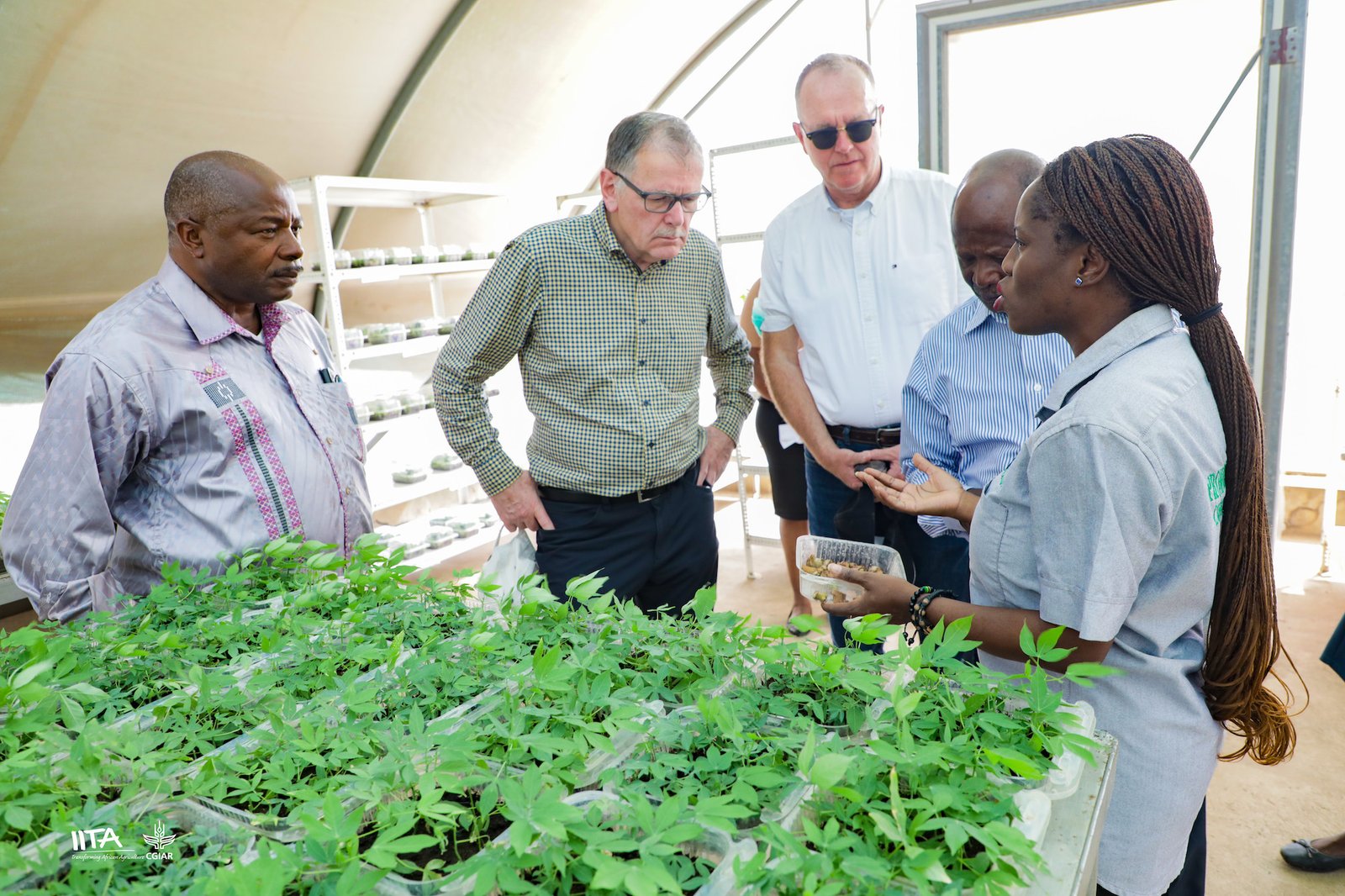 Dr Sanginga (left) with members of IITA Board of Trustees during a tour of a research facility this year. Photo Credit: IITA.

Scientists at the 55-year-old institute, which is part of the CGIAR stable, have been linked with transformative research and innovations that have lifted more than seven million people in Africa out of poverty and minimised hunger and malnutrition.

They famously saved Africa from the Cassava Mosaic Disease that threatened to wipe out the crop on the continent’s farms in the 1980s and expanded the West African maize belt beyond the savanna to the Sahel through their improved varieties.

On Dr Sanginga’s watch, IITA has expanded its footprint on the continent’s farmlands and taken on big-impact research efforts, inspired by the director-general’s research for delivery mantra.

Instead of just 500 people benefiting I would ask, why not millions?” he posed during a recent interview with PanAfrican Agriculture on the International Centre for Insect Physiology (ICIPE) campus in Nairobi. The findings of a number of impact assessment studies of IITA programmes suggest that Dr Sanginga’s research for delivery dream has been largely realised. For example, the adoption of drought-tolerant maize varieties introduced in Nigeria in 2011 are estimated to have since lifted more than 2.6 million people out of poverty while over 750,000 people have been similarly impacted by IITA technologies in Central Africa.

In addition to its traditional research programmes on crop improvement, Dr Sanginga has also nudged the institute’s scientists towards new areas such as business incubation and commercialisation of their innovations.

Aflatoxin contamination is associated with chronic health effects and huge post-harvest losses in most African countries. “It took me many years trying to persuade the IITA Board of Trusties to approve these new programmes. But when once we approached Bill Gates for funding he raised the same questions about impact.

I made a similar presentation and he gave us USD 10 million for the business incubation programme,” says Dr Sanginga. So, when in 2018 IITA won the Africa Food Prize, it was no more than Dr Sanginga and his team of scientists deserved. IITA was the first institution to win the award for its research and development impact.

The USD 100 million prize recognises Africans who are taking control of Africa’s agriculture agenda, putting a spotlight on bold initiatives that can be replicated across the continent to create a new era of food security and economic opportunity for all. “Winning the Africa Food Prize was an exciting experience. The Africa Food Prize recognised the true efforts that we all put in. During my first seven years we had changed the orientation of IITA.

We created the department of research delivery and [through it] we were able to impact more farmers and institutions,” says Dr Sanginga. IITA was also given the 2016 AISummit Prize for Food Security for its “sustained efforts in undertaking groundbreaking research development that continues to positively affect the lives of millions on the African continent.” IITA shares the recognitionwith a $1 million cash prize- with sister center International Potato Center (CIP), cited for its work on orangefleshed sweet potato to address Vitamin A deficiency.

The two CGIAR centers are also the first laureates for food security. Going back in time to when he took the top job at the research institute in 2011, the mood could not have been more different. He recalls inheriting a largely broke organisation struggling to motivate and retain its small cadre of scientists and expand its research facilities.

“Things were down. The organisation had a deficit of about USD 15 million on a budget of USD 47 million,” he says. In addition to putting the organisation in robust financial health, he has also overseen the significant decentralisation of its facilities from Ibadan-based headquarters to include research stations and hubs in at least 15 African countries currently.

So how did he turn it around?

“Two things were important to me: Who were the people at IITA? Who had the resources?” Dr Sanginga says of his earlier efforts to retain staff and fundraise for the institution.

Well, his management midas touch also had something to do with the skills he learnt on the soccer pitch in his youth. Were it not for some coincidence between university exams and the 1974 World Cup in Germany, he might well have ended up a celebrated soccer star for his country.

“When I was a first-year student at the university, I was selected on the Zaire [now DRC] team that played in that year’s World Cup but I chose to stay back in the country to sit exams. It was perhaps the only time I did not make a mistake in my career choices. However, I have found the skills I learnt as a footballer useful in my management and leaderships roles.

I was a midfielder, a position that requires you to mostly pass the ball to others. As a midfielder, you cannot be selfish. I use those skills to build teams, for example,” says Dr Sanginga.

During his frequent travels across the continent,

he says, few things make him feel proud like random encounters with younger scientists who introduce themselves and tell him how excited they are to count IITA as their alma mater. Indeed, his next assignment will involve nurturing the next generation of African leaders in agriculture. “I have been thinking about what I will do after retirement from IITA later this year. I have decided to set up the African Agriculture Leadership Institute (AALI), which will be like an academy for changing mindsets about agriculture.

We will identify young leaders with potential to transform agriculture and train them. We will also take in those already in leadership or government, including ministers of finance and presidents, and retrain them to make the right policies,” says Dr Sanginga. AALI, whose patrons are DRC president Felix Tshisekedi and former Nigerian president Olusegun Obasanjo, will be inaugurated in February next year.

Disruptions to the global food supply chain related to the ongoing Russia-Ukraine war and the COVID-19 pandemic have rekindled the debate about the need for Africa to feed itself in the wake of the biting wheat, fertiliser and edible oil shortages caused by the conflict. The war in Eastern Europe has particularly exposed Africa’s soft underbelly in food production, with reports indicating it has depended on the two countries for more than 40 percent of its wheat imports.

“The challenges are an opportunity for the development of Agriculture in Africa and some countries are already seizing it. A good example is DRC where citizens realised cassava flour could be used for making bread,” says Dr Sanginga. Cases of households and eateries embracing cassava bread to replace wheat products have also been reported in Côte d’Ivoire.

The rise of agricultural innovations in Africa inspire hope that the continent might be able to feed itself someday. Dr Sanginga says the continent needs to get the right leaders in public service and attract private investments in agriculture. “We are not there yet. But there are a few examples of good leadership. In 2011 when Dr Adesina [Akinwumi] became the Minister for Agriculture and I was at IITA, we decided that Nigeria will not import what it has the potential to produce locally such as rice. We knew that we had to involve the private sector to succeed. So, we approached Aliko Dangote [one of Africa’s richest men] and asked him to invest in rice production.

He agreed to put in about USD 1 billion. In a space of three years, we had cut importation of rice into the country by 50 percent,” says Dr Sanginga. The Nigerian ‘Green Revolution’ was slowed down by what Dr Sanginga believes were inconsistent policies after a new administration took over in 2015.

“I’m convinced that the public sector is insufficient to get us there [selfsufficiency in food],” he says. Dr Sanginga’s interest in a future career in agriculture was cultivated on the farming fields in Bukivu District in Eastern DRC where he grew up helping his mother with routine farming chores such as digging, planting, weeding and harvesting.

He attended local schools for basic academic qualifications and a public university for an undergraduate degree before proceeding to Nigeria for postgraduate training at IITA and his PhD in Agronomy/Soil Microbiology.

Before joining IITA as director-general, he was the executive director of CIATTSBF and also had a working stint at the International Atomic Energy Agency in Austria. 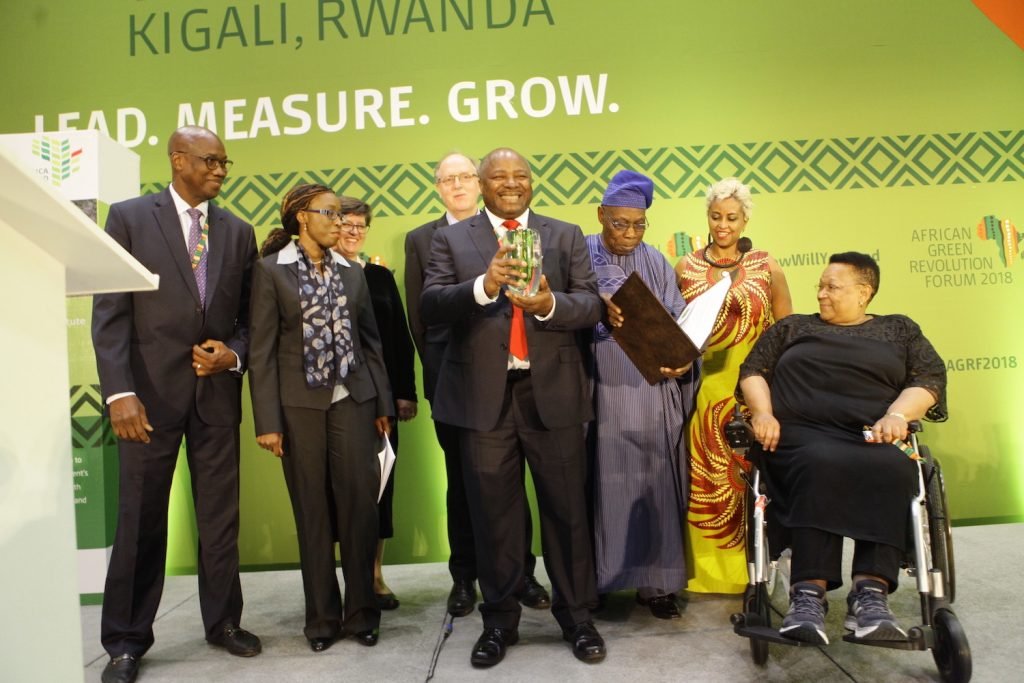