Kenya in a race against time to restock Sahiwal cattle breed

S
AHIWAL, a dual-purpose cattle breed indigenous to Pakistan and India, were imported into Kenya in the 1930s and 1940s.

Mostly found in semi-arid areas and in major ranches in the country, Sahiwal has emerged as one of the best beef and dairy breeds. Cows average 2,270 kg of milk during a lactation and much higher yields have been recorded. Its bull weighs about 600kg, twice the average weight of local breeds, with a price of a calf aged around one year going up to Ksh40,000.

It is tick-resistant, heat-tolerant and also has a high resistance to parasites, both internal and external. Despite the importance of Sahiwal cattle, its production in the country is now being affected by several challenges, including an acute shortage of breeding stock and inbreeding, which leads to loss of genetic diversity and low productivity.

The Kenya Agricultural and Livestock Research Organization (KALRO) says livestock farmers, especially Maasai pastoralists who heavily rely on Sahiwal genetic resources for their livelihood, are facing difficulties accessing the right heifers and bulls at affordable prices. Mounting concerns that the country is on the verge of losing the superior breed have seen the government racing against time to reintroduce and increase the population of Sahiwal.

Through a community-based genetic improvement and multiplication programme financed by the National Research Fund (NRF), KALRO is working with Maasai pastoralists in Transmara South, Narok County to restock their Sahiwal herds.

“Currently, it is a race against time for the research team to address the whole challenge of access to superior Sahiwal top genetics in Kenya,” said KALRO Director-General Dr. Eliud Kireger.

So far, the KALRO-led programme has assisted the community to produce 309 superior Sahiwal AI calves (males and females), 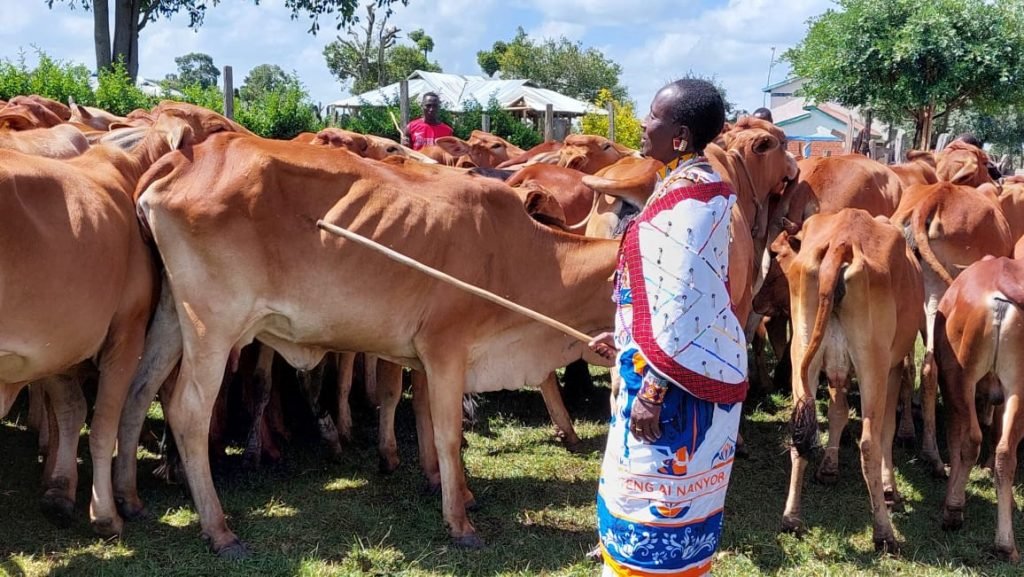 which have been distributed among members of community.

Further, 1,234 Sahiwal cows and bulls have been registered with Kenya Stud Book into either foundation or pure-bred classes since the start of the three-year programme, dubbed ‘The Smallholder Farmers Access to Improved Cattle Genetics in Kenya’. “The registered animals have been issued with certificates by the Kenya Livestock Breeders Association and their market price has increased threefold,” Dr. Kireger said. Sixty-five farmers and extension personnel have also been trained on good Sahiwal cattle management practices while nine elite and progressive Sahiwal cattle farmers have been trained on assisted reproductive technologies (ARTs).

To achieve effective population and genetic diversity for Sahiwal cattle, the programme aims to have the whole community, including women, learn skills, genetic improvement and multiplication. KALRO hopes to replicate the programme in other parts of the country to boost production and resilience of the Sahiwal cattle.

Dr Samuel Mbuku, a livestock breeder and the principal investigator in the project, said the multiplication programme involves use of assisted reproductive technologies (ARTs) such as estrus synchronisation and artificial insemination (AI) to enable and increase the rate of genetic progress, faster multiplication and distribution of top most proven Sahiwal genetics among farmers.

“The main challenge for Sahiwal cattle is access to the breeding stock, breeding males and females. We found out that many farmers were forced to queue for this breed at KALRO

Naivasha and this was not sustainable,” said Dr Mbuku, a leading scientist at Veterinary Research Institute. “We wanted to increase milk yield output in this area and have many breeding animals especially males and in that way look at lowering the cost of the animals in terms of purchasing from Naivasha. Now farmers are no longer going there to look for the genotypes since they can get them locally.”

Since the programme started, they have over 170 bulls locally with farmer groups in the Lolgorian division in Transmara where the appetite for the breed was very high and the genetic material is circulating in the area.

James Olenagida, a livestock farmer from the MAA community said, “We used to keep the kienyeji (local breed) cows but since the introduction of the Sahiwal heifers, the community has upgraded and slowly by slowly embraced the new breed. We have realised it has a lot of benefits, giving us milk, meat and money.

Initially we used to travel to Naivasha to buy ordinary cows and could use almost Ksh270,000 on buying and transporting them on lorries experiencing a lot of problems,” said Jameson Olenagida, a local livestock farmer. Wilson Kipeno, the community’s coordinator for the programme, said after the farmers received training from KALRO on the AI technology, they are moving away from keeping the ordinary cow breeds betteryielding ones like the Sahiwal.

David Mosingo, another farmer, said initially they were also experiencing less challenges with ticks and water after adopting the Sahiwal breed, which also grows quickly. Noonkuta Sampei said she was getting more milk from her few lactating Sahiwal than she would from a much larger herd of ordinary cows.