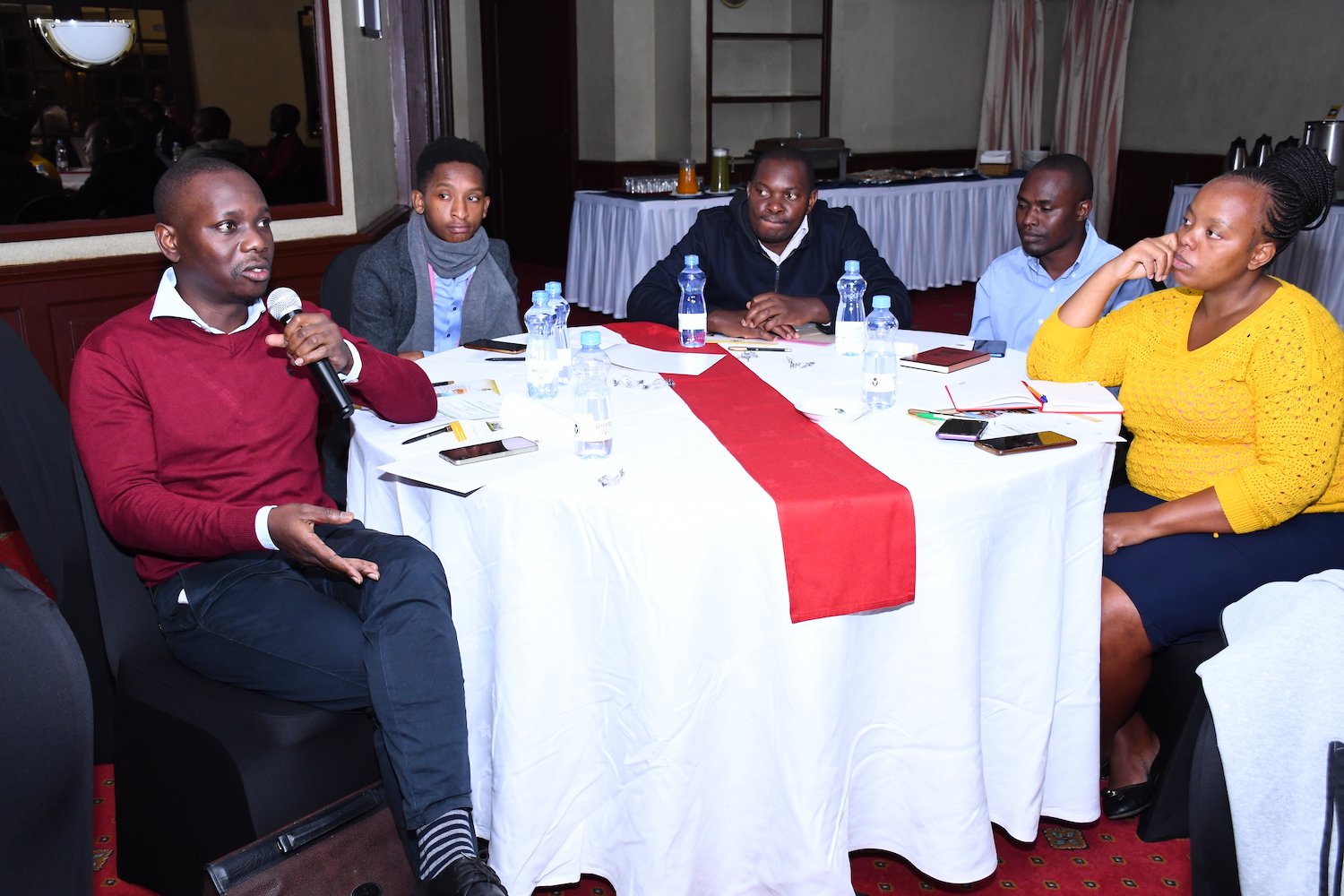 A section of the journalists who attended the media science cafe organised by ISAAA Africenter. Photo Credit: ISAAA Africenter
Download PDF
I
N less than three years, the World Health Organisation (WHO) has announced two public health emergencies of international concern, Covid-19 and monkeypox, both linked to pathogens transmitted from animals to humans.

Experts are warning that new pathogens jumping between animals and humans will become more frequent as habitats change in a warming world. The animal-human diseases, technically known as zoonotic diseases, cost many countries millions of dollars every year spent in response and control efforts.

Increased movement of people, exchange of goods and foods within and across borders coupled with environmental degradation have seen diseases previously confined to a limited population spreading widely as people and animals seek favourable surroundings. Dr Mathew Mutiiria, a medical epidemiologist in Kenya’s Ministry of Health, says such diseases can be best controlled through the ‘One Health’ approach — a concept that recognizes the fact that human and animal health is interdependent and bound to the health of the ecosystems in which they exist.

Dr Mutiiria says the ‘One Health’ approach to disease control involves the participation of experts in human, animal, environmental health, and other relevant disciplines and sectors in monitoring and controlling public health threats and to learn about how diseases spread among people, animals, plants, and the environment.

The WHO also encourages collaboration across sectors and disciplines to protect health, address health challenges such as the emergence of infectious diseases and antimicrobial resistance.

Two million people in low- and middle- income countries die each year from neglected endemic zoonotic diseases such as anthrax, bovine tuberculosis and rabies every year.

These include the white and black rhinoceros, Rothschild giraffe, elands, Thompson gazelles, waterbucks and Grevy’s zebras. “Kenya is at high risk from zoonosis and other trans-boundary diseases due to her geographical location, growing human population, close livestock-wildlife-human interactions and porous borders,” Dr Mutiiria said during a recent media science café organised by the Open Forum on Agricultural Biotechnology in Africa (OFAB) in Nairobi.

Kenya’s Ministry of Health estimates that about 2,000 rabies-related human deaths occur in the country annually and the number could be higher due to inadequacies in the current surveillance system. The average cost of post-exposure treatment for rabies in Kenya is Sh9,000 per patient and is higher when the psychological trauma and the financial hardships are fully accounted for, according to the medical epidemiologist.

In July, Tanzania’s Minister for Health confirmed that more than 20 cases of a mysterious illness that resulted in three deaths in the country were linked to leptospirosis — a bacterial disease spread mostly by coming into contact with the urine of an infected animal, or water, soil, or food.

By linking humans, animals and the environment, the ‘One Health’ approach can help to address the full spectrum of disease control – from prevention to detection, preparedness, response and management, and contribute to global health security.

The approach can also make it easier for people to better understand the co-benefits, risks, trade-offs and opportunities to advance equitable and holistic solutions. In Kenya, the government developed the One Health Strategic Plan for the Prevention and Control of Zoonotic Diseases in Kenya (2021-25), which is implemented by the Zoonotic Disease Unit domiciled at the ministries of Health and Agriculture. The strategic plan shows that brucellosis, bovine tuberculosis and non-typhoidal salmonella alone cost the country more than Sh600 billion annually, corresponding to 3.9 per cent of the national GDP.

The Zoonotic Diseases Unit has managed to strengthen surveillance across the country to slow down these diseases and prevent major outbreaks. Zoonotic pathogens can spread to humans through direct contact or through food, water or the environment.

Public health experts link the recent outbreaks of zoonotic diseases such as Ebola, bird flu, Middle East Respiratory Syndrome (MERS) and Zika virus, to humans encroaching on wild spaces. The International Livestock Research Institute (ILRI) recently held a conference to discuss the One Health approach and how to support and implement it.

Dr Hung Nguyen, the co-leader of Animal and Human Health Program at ILRI, said the recommendations from the conference will guide policy makers, government officials and other stakeholders on how to implement the One Health approach.

Dr Mutiiria also notes the implementation of the approach in Kenya is faced with challenges, including limited financial resources and data. Other challenges experienced in the country are limited expertise in the environmental sector and bureaucratic processes.